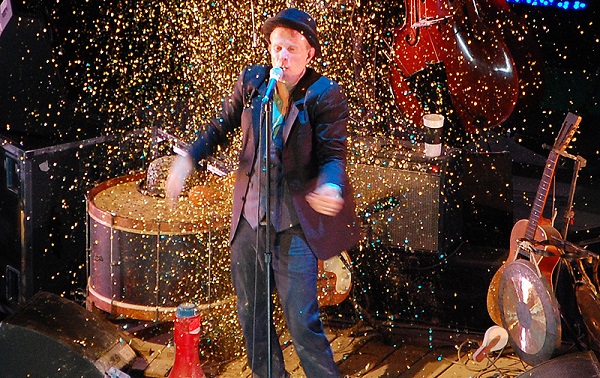 Posted by Charlie Recksieck on 2022-05-24
Here’s the exciting conclusion to our Tom Waits Celebration. Click here to read part 1 from last week.

Even though a good part of Tom Waits' genius is his use of the studio and his choices as a producer, I think that's where he might sound off-putting to newbies, along with his voice.

When a band is playing to a live audience, the goal is not usually alienating the paying customers. Live performing inherently is usually as accessible as possible. Which is why I'm recommending these two live albums as any new Waits listeners as entry points. Nighthawks At The Diner (1975) is Tom at his Kerouac piano best. Then I've set you up here with Glitter And Doom (2009) with explosive performances. Both feature Tom's patter in between songs. This is not the gravel-voiced downer you might have feared, this is one of the best comedians on the road at times.

Nighthawks At The Diner

I'll admit it. I'm completely envious of his career.

The 1970s: His was 10-15 years of gnarliness. To live the beatnik life, it seems like he self-imposed living on the edge. A fun way to spend your 20s and early 30s. He had longterm relationships with Bette Midler and Rickie Lee Jones. As for Rickie Lee, it was probably a wakeup call when your heroin use was too much for Tom Waits and your lifestyle made him say, "I'm out."

The 1980s: After meeting his eventual wife, Kathleen Brennan, they move to New York and embark on his most successful and experimental period in the most exciting city in the world.

The 1990s and beyond: Raising a family in Northern California and continuing to record whatever he wants, touring less (but sometimes).

And all the while, he has a great second career in acting. His stuff with Jim Jarmusch is incredible (Down By Law, Mystery Train), was great with Lily Tomlin in Short Cuts, he was the best part of both Mystery Men and Bram Stoker's Dracula, starred in my favorite section of The Ballad Of Buster Scruggs, brightens up Licorice Pizza and was flat out heartbreaking in Ironweed.

OK, this was a long one. Thanks for indulging me. Even if nobody is reading this far, I wanted to get this all down "on paper", at least for myself.

Here's your Tom Waits playlist from a huge fan - followed by hopefully very brief thoughts about each of the Top 10 (which leans heavily toward his Island Records years).

1. Swordfishtrombones
In a way, this song and this album was Waits throwing down the gauntlet and announcing his new musical styles to the world.

2. Tango Till They're Sore
I used to work at an SAT-test prep place with a guy who I'd give a ride home to; great guy, a little crazy, he lived in a legitimate flophouse and he said the lyrics "Put your clarinet beneath your bed til I get back in town" summed up his life.

3. Way Down In The Hole
You might recognize this as the song from The Wire's opening credits, recorded by a different band each of the 5 seasons. It kind of shows how great and durable his songs are, should more people choose to reimagine/cover them.

4. Time
A great ballad where the narrator has an epiphany and chooses to give himself a break. Beautiful stuff.

5. Picture In A Frame
During the COVID pandemic, there were plenty of nights when I was feeling a little nutty I could calm myself down by playing piano at home. This was the song I played pretty much every one of those piano nights.

6. Putnam County
People always advise songwriters to paint a picture with their words. Listen to this one: I guarantee you can visualize the bar in this song and probably the decor in the narrator's house, too.

7. Johnsburg, Illinois
A completely unironic love song from Tom to his new wife. It clocks in at 93 seconds and you don't even need a second more.

8. I'll Shoot The Moon
I prefer the live performance on the Glitter And Doom album. But when I describe the 6 modes of Tom Waits earlier, this is the one that kinda embodies them all: Beat poet, ballad, but a spiritual, but with his ringmaster persona and great instrumentation.

9. Innocent When You Dream
If you've seen the 1995 indie movie Smoke and remember the end, you know why this is in the Top 10.

10. Frank's Wild Years
The Beat storytelling of Waits' 70's jazzcat songs is all here; with the secret weapon in this one being that the music is a little more interesting with the organ.