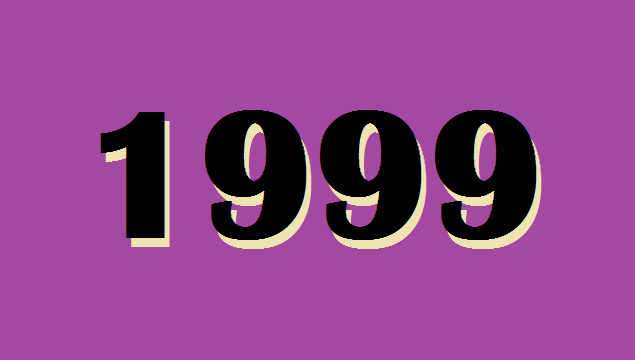 Posted by Charlie Recksieck on 2022-06-07
Songwriting is an art, not a science. There's no formula to how to write lyrics, and some enduring classics are incredibly specific while others are pretty darn oblique. But we all have favorite songs because of what they mean to US, not necessarily because the message is so specific. A writer can think they're saying one thing, but you might hear a completely different thing yourself.

Similarly, lyrics could mean one thing to you at age 12 then something else entirely once you're an adult.

In this article I'm gonna try to make the case about a song that has a different meaning in different eras just because the number of the year. We're talking about Prince's "1999".

Today, June 7th, is Prince's birthday. He died too soon in 2016, during a string of beloved performer deaths like David Bowie and Tom Petty when that was enough for people online to declare 2016 as worst year ever.

Anyway, the song "1999" was released in 1982. Prince had been making records for a few years to rave reviews but one of his first singles to hit. It is a very 80s song, so much so that Phil Collins' subsequent nonsense hit "Sussudio" is basically the same two-chord song without the catchy Prince chorus.

But the song endures ï¿½" even well past the once-futuristic date of 1999.

I'm going to go on to describe four different periods of what the song is about (although it's always just basically advocating partying). Keep in mind, these are all just theories of what the song seems to be about - there's no objective meaning for lyrics. First, the actual lyrics.


I was dreamin’ when I wrote this forgive me if it goes astray
But when I woke up this mornin’ could’ve sworn it was judgment day
The sky was all purple there were people runnin’ everywhere
Tryin’ to run from the destruction, you know I didn’t even care

I was dreaming’ when I wrote this, so sue me if I go too fast
Life is just a party and parties weren’t meant to last
War is all around us my mind says prepare to fight
So if I gotta die, I’m gonna listen to my body tonight, yeah

If you didn’t come to party, don’t bother knockin’ on my door
I got a lion in my pocket and, baby, he’s ready to roar
Everybody’s got a bomb, we could all die any day, aw
But before I’ll let that happen, I’ll dance my life away

Also common to children of the 1950s to 1970's? The threat of mutually assured destruction with the Soviet Union. Deep in the back of the mind of many kids from that era was the thought that "we might not make it that far, so fuck it; let's have a good time."

This one is easy. The single was re-released and played all over the place that year. It's a celebration of being alive in 1999.

At this point, the song flips to nostalgia. I'd bed that Prince never considered what this song would feel like in 2010. But when you're drinking and dancing at a bar, it's also pretty appealing to hear that you can turn back the clock 5 to 15 years.

The song always seemed to be promoting the idea of "partying" as a celebration of life, despite whatever bad news you might be hearing. Choosing life usually sounds like a good idea.

But after Prince OD'ed on Fentanyl in 2016, living in the moment (if that meant thinking that drugs are consequence free) started to seem a little overrated and immature.

Thanks for indulging me on this one. The main point is that song meanings can morph. As the Four Tops sang, "It's the same old song but with a different meaning since you've been gone."

Anyway, today is Prince's birthday. Go listen to his music. It's time well spent and you know I’m right.