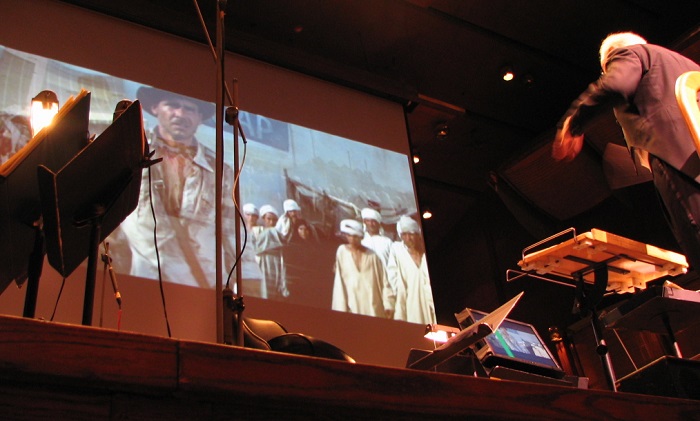 Posted by Charlie Recksieck on 2022-04-05
NOTE: This was originally written for publication in the San Diego Troubadour, a terrific local music news publication run by Liz Abbott and Kent Johnson here in San Diego.

Last week we talked about film scoring in general and what we thought the plan was, going on. Here in the conclusion below, we share how it went in our case.

There are definite differences between writing songs and writing score. Songs need to be fully realized & have several layers to be listened to by themselves over and over. Score really just needs a couple of elements. This is great news for a new composer, especially one like me in a rush. It afforded me the opportunity to pull long-abandoned false starts of songs that were little more than two chords back and forth ... record them and voila, you've got another piece for the movie.

I wish I could describe "the process" for anyone interested here, but truthfully the process is such a wild mess, especially to get 50 cues just right in a tight schedule. I would describe it as pulling whatever I had out of my pocket and throwing it at the wall to see how it looked.

I broke up the "Always Be" song a couple of ways to buy a couple of cues. I used a recording of Mike's deceased mother singing the old traditional "Early One Morning" and flipped those chords around a bunch of ways for some cues. I knocked out an electro version of Faure's "Pavane" as a placeholder and we never got rid of it. I put simple grooves over beats for music during walking or exterior scenes to feel like we were moving. I recycled a failed jazz songwriting attempt (once "My Dog Loves Jazz" became "Meet Your Artist") for one and removed the Roosevelt samples from a thing on the shelf I wrote years ago ("Fear Itself").

I wrote an unusually trippy accompaniment to a performance art piece using coroner reports from the autopsies of David Foster Wallace and Elliott Smith ("Two Autopsies"), then deconstructed that into another two things in the film. I wrote quick tremolo guitar moods that seemed like rejected notes from a bizarro episode of Friday Night Lights for other interview scenes. Seriously I was throwing in everything but the kitchen sink.


How I Thought It Was Gonna Go

I remember in late 2010 before my job on the film began (my scoring was done mostly from March to June 2011), I was very high minded and wanted to come up with some super-unified, thematic complete film score like two of my favorites: Carter Burwell's score for Being John Malkovich, and Jeff Danna's for The Kid Stays In The Picture (I should tell you that I think those two are in their own ways the greatest two film scores that I've ever noticed. They won't jump off the screen like flashier things from a Tarantino movie, but they're incredible).

I was in Sweden at the time at New Years with the daily two hours of daylight, walking all around Stockholm with my headphones and falling asleep listening to those two soundtracks nearly around the clock. I guess I was hoping for inspiration to come up with something complete. Falling asleep in Sweden every night I pictured myself like Randy Newman at a grand piano with a full orchestra in a sound stage. That's not how it ended up getting done. At all. It was more of a panicky rush, like a guy in a sinking balloon throwing things overboard.


What We Came Up With

When time came to deliver, it ended up as 50 cues for the movie (27 songs for the soundtrack CD) that are stylistically all over the map. Perhaps that would sound like a bad thing, but it fits the movie. The movie has a constant series of stylistic turns that jump around just as quickly.

By the way, I really do urge that you see the film - it's a ballsy film, and you won't believe me at first but it is a faithful documentary about suicide that just might make you laugh and feel good at the end; ideally it could start conversations that prevent a suicide. OK, commercial over.)

At the point where the whole movie was scored, we noticed that we had two minutes of credits with no music. Normally a movie with any budget at all would have put the word out and bought the rights for a song from an unsigned band for the end. But we didn't have the money, for starters. And I did want to tie the end to a little of the music for the movie.

So, I did one last song for it. I just kind of wrote what was going on in my head at the time - the lyrics were a combination of a thank you to a close friend, and a shout-out to a musician friend (who many of us here know & who was having a hard time). Again, it's not the type of song I normally write but the whole movie score was filled with things that I don't normally do with The Bigfellas. By the time I pulled Mary Grasso in to sing it as a duet, she totally made that song. Everything about everything here was a happy accident. And shows that you set sail for one destination and always end up at some other one - definitely in music & probably in life, too.

Looking back, I'm not sure how it happened, but the right music really happened for the whole movie. I'm proud of myself; actually, I'm proud of everybody who made the movie. Unintended consequences are terrific in art, many directors make mention of "happy accidents." And that's good. It's why we musicians shouldn't be holing up in garages, home offices & ProTools all of the time.

Here it is two full years later after Mike and I were hammering vodka tonics and discussing just a germ of his idea for a documentary. It's been in the can for a few months, we've had some advance screenings and we're learning about the painfully process of trying to promote an independent film in advance of an official Fall 2012 premiere.

If you want to make money or be famous, I really suggest taking another route. And the time spent doing my part really was fairly stressful, difficult and frustrating to just be one cog in a whole production, not just a dude with an acoustic guitar. Yes, this whole thing was a wonderful pain in the ass. And I can't wait to do it again.

More info on the film, Don't Change The Subject, can be found at http://www.dontchangethesubject.org or its Facebook page.

The soundtrack CD can be found on iTunes, Amazon, CD Baby and in our soundtrack page