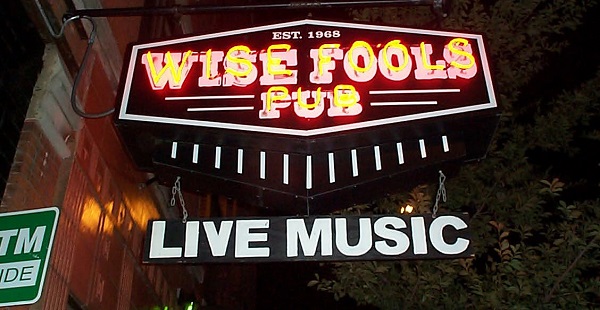 Posted by Charlie Recksieck on 2022-05-03
I recently stumbled across some photos of this 2004 show we did in Chicago. It's become such a legendary show in Shay and my minds that this seems like a good place to share it.

Bigfellas co-founder and version 1.0 lead singer Tim Gadzinski and his wife moved back to Wisconsin from San Diego in the Spring of 2004. It was a brutal loss for us; Tim is a legitimately great frontman, great songwriter and close friend. But he and his wife were raising a family and we understood that the cost of living in Southern California was brutal.

With Tim in Wisconsin we almost immediately planned a little tour in the Midwest for the fall, whatever we could scrape together. Keep in mind, there is no demand for touring spots for a band that barely draws 50 people in their own hometown at the time, so it took a lot of work to cabal a tour together. But we did.

Shay and I would take two cars to get to Wisconsin, his then-girlfriend (now wife) Pam in his car as roadie and fan #1 while in my car I would have violinist/keyboardist Don Hickox (more on Don joining us later). Tim Hempstead would fly out to Milwaukee, and join us at Tim Gadzinski's to make a five-piece band. Meanwhile we'd play at a couple of goofy open mics and such on the way out there. This whole driving part of the tour merits its own blog post in the future. 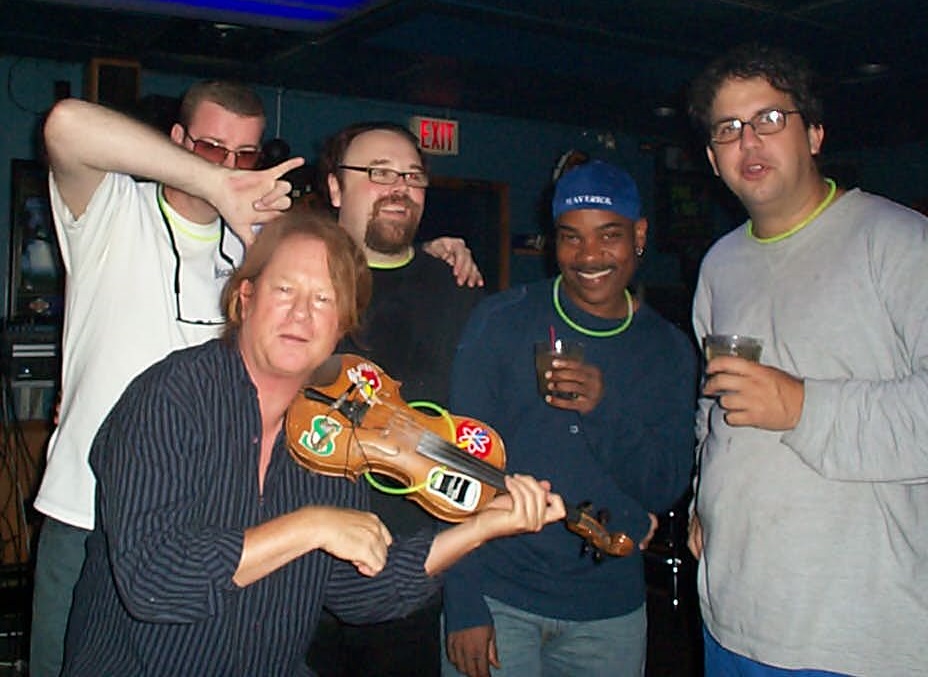 Don "Donnie Bratwurst" Hickox was not really a member of The Bigfellas. He was a nice guy who I'd played with in an Irish band prior to Bigfellas and every once in a while we'd get Don to join us or record in studio. His violin playing really is incredible; and he's not afraid to run it through effects pedals to give it a Hendrix sound.

Anyway, it was always hard to get Don to commit to joining us at gigs. If we were playing five miles from his house and gave him three months warning, we'd never seem to get him. But at the end of September, Shay and I ran into Don at some club and told him we were going on tour for three weeks starting in two days and joked, "Wanna come?" And Don said, "Yeah, sure." Us: "Don, you realize that you'd be in a car for weeks and 2000 miles away from home. Right?" Spaceman Don: "Yup".

I picked Don up at his house Tuesday morning and sure enough he piled in and was the best co-pilot a driver could have. Shay and Pam saw us at a gas station outside of Vegas and Shay was still in total shock that Don made the trip.

The tour was going well, fun evening playing in Colorado, road food and sightseeing, whole band together in Wisconsin, a long college gig, a disastrously underpromoted show in Appleton. Then it was time for Chicago.

We drove the two cars from Manituwoc, WI. We had to go to The Loop for chili cheese fries and some drinks pre-show.

Wise Fools Pub has some history as a great blues club where you might have seen Muddy Waters. Not on this night! But we were in mid-tour form, playing every night for a while really tighten us up musically, and we were dedicated to having a good time and imbibing.

We got to the club really early and found the owners still ripping the ceilings apart, I swear doing asbestos remediation. Sounds about right for a Bigfellas show. Fine. We hit the bar and I remember us having a lot of pot with us for that one. We piled into the bathroom as a group a few times and a comical amount of smoke followed us out when we left, a la Spicoli's van in Fast Times At Ridgmont High. 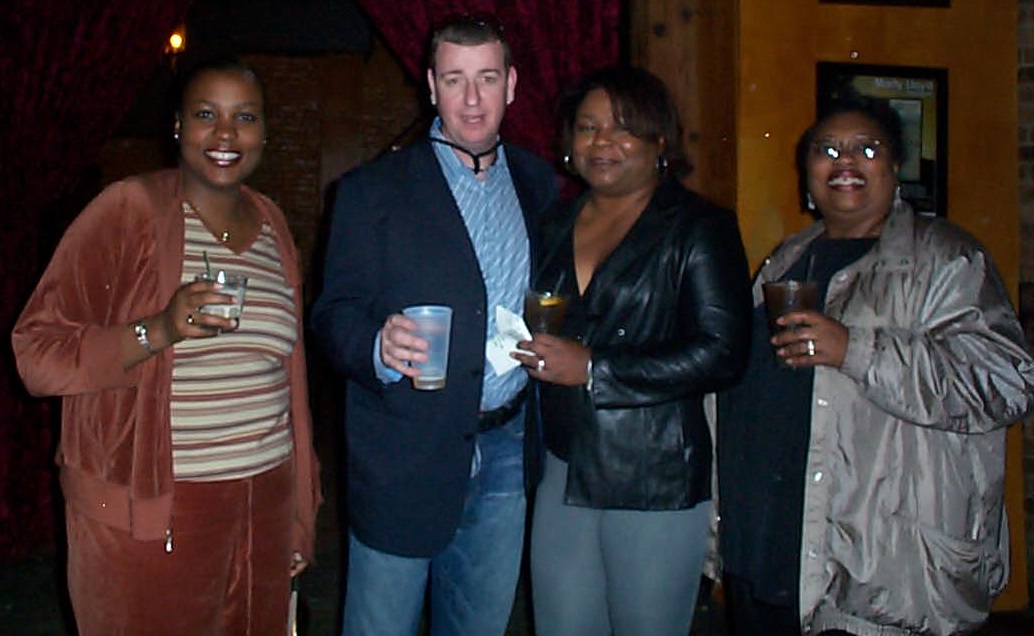 Also as you can see here, the ladies found Shay. I still don't know how they found him, but ladies love a drummer.

There was an opening act, a local guy whose name I can't remember. I could swear his name was John. He was terrific and had some people out to see him who stayed for us. 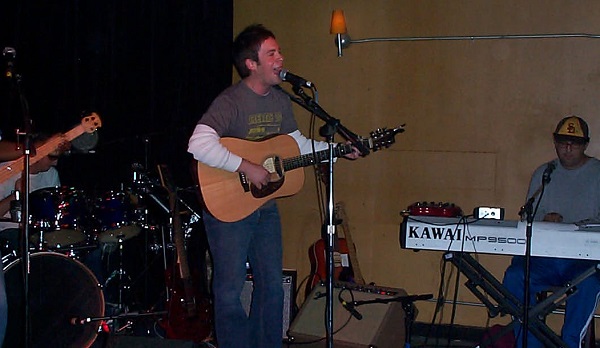 By the way, I think the total crowd for this evening wasn't more than 30 people. It's crazy to romanticize a show for 30 people this much. But everything is heightened on the road - drinks taste better, each club is a novelty, and you appreciate total strangers going to see you when you've never been on the radio.

What took this show to another level is that everybody reached a perfect state of sex, drugs and rock & roll - just without the "sex" part. Tim H and Don were perfectly stoned, Tim G and Shay had the maximum amount of drinks in them to sound great, and I toggled between the marijuana and the booze and got myself to a good place.

Before a last set, Don was high as a kite and wandered to the mic and just started doing patter and then just told a series of 6-7 jokes. I mean his pupils were dilated to the size of coffee saucers. But his corny jokes were landing belly laughs every time. I've never seen professionals kill that hard in comedy clubs. And then he starts playing his violin, incredible solo stuff like it was coming from The Chieftans or something in Dublin. Shay is a tough an audience as anybody and I swear he was crying tears of appreciation like it was Irish music from the old country. Don was in a zone. Then 20 minutes into our set, he was holding the wrong end of the violin bow. 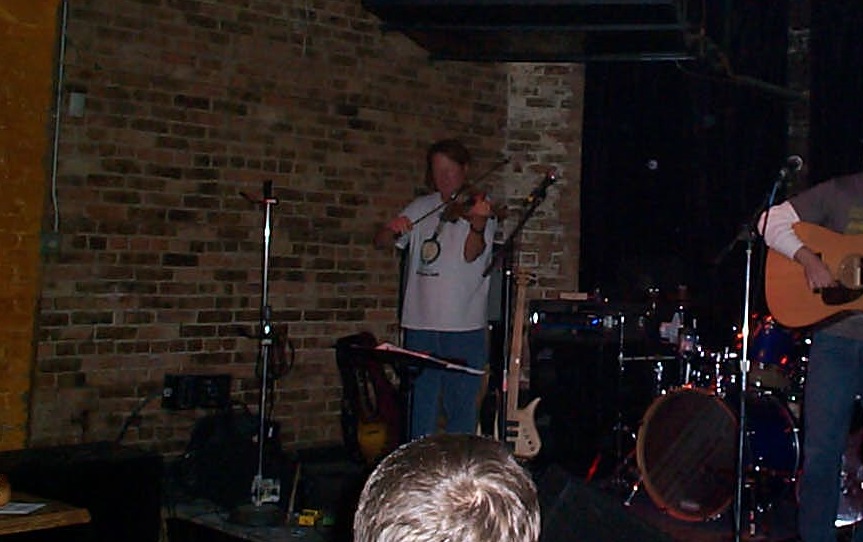 The Rest Of The Night

The opening act joined us for a jam at the end. 25 people were so into it - couldn't have felt better if it was 250 people. Every person in that building had a total blast that night. (Six months later, two of the girls in that audience happened to be in San Diego and tracked us down; it was our first time we could say we had a "following.")

Everybody left happy. Although that was short-lived for Don and me in my car, we had Mapquest directions since this was pre-GPS era. I swear to God I followed the directions to the letter and it took us through Southside Chicago even though we were headed north to Madison. After driving 60 minutes and on the 11th step of the directions, we went right past the club again and past Wrigley Field for the second time after the show before eventually getting north and into our hotel around 4am the next day.

I hope I conveyed some of just how fun this particular show was. Before a band has a real following, it is a slow process to be able to play good shows on the road. You've got to go open for somebody on a first time in a town. Then maybe if you're killing it on those shows, by a third or fourth time through the town you've got enough word of mouth to draw 60 people by yourself. We've gotten to this place up and down the West Coast after passing through and playing some spots multiple times. But it is not easy. On this very same tour we played a couple of shows to 100 and 150 people, so this Wise Fools Pub show was far from the biggest crowd.

Many times, you're spending so much time, money and effort to try to make your little shows and tours something that's worth it and not a deluded fantasy ... but every once in a while, all of that stupid effort results in a magical little evening for everybody and then all of the pointless energy is all worth it. That's why you play music. 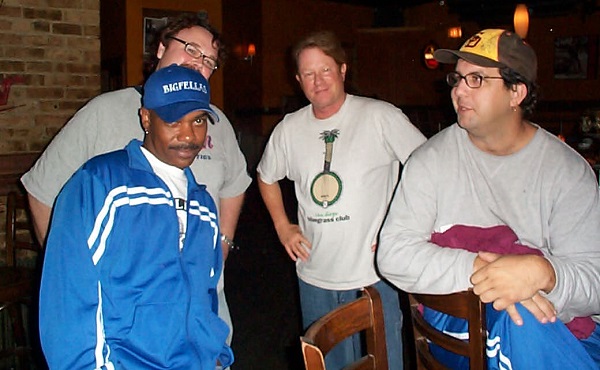