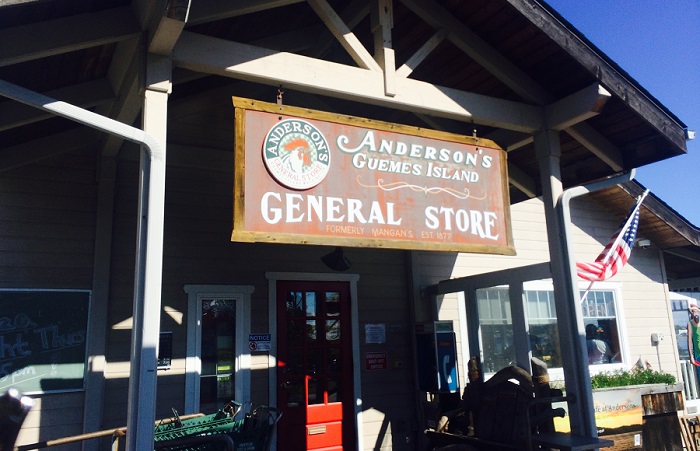 Posted by Charlie Recksieck on 2022-07-05
For the 4th of July it's only fitting that we share a little tale about one of the oddest gigs we ever had. It was on July 4, 2015 in Guemes Island near Anacortes, WA.

The good news: We were headlining a festival! The bad news: The festival was boycotted by the locals on the island who were at war with the owner of the venue.

There's a wonderful place called Guemes Island in Washington state. It's up near the San Juan Islands. The island has a permanent population of about 600 people. You can only get there via a small 8-car ferry from Anacortes. If you're ever in Anacortes, I can't recommend more strongly that you hop over to Guemes.

On the island there aren't many businesses. There's a hotel on the north side (that's a whole other blog post). On the south side landing where you first arrive, there was one business called Anderson's General Store (now Guemes Island General Store). The store consists of the only gas station on the island, the only store, the only bar, the only restaurant and also the local water utility. 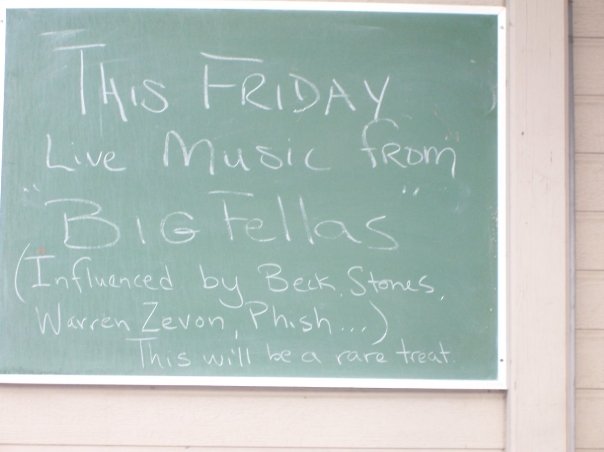 The place is so remote, that my cell service on the island came from a Canadian provider.


History Of Playing There

The Bigfellas first played there in 2009. We never would have found it if my mom wasn't living on nearby Whidbey Island at the time. The band was already planning a tour from San Diego to Seattle anyway that summer, so playing up there was a natural. As Shay has said many times about us in the 2000s, "We'd play at the opening of a Coke can."

We found it looking for places to play in the area, and they had bands there in the summer plus a well-reviewed restaurant. The owner at the time, Charlotte, couldn't have been nicer to us. We just wanted a place to play before all crashing at my mother's house that night. She paid us $400 plus food and drink, which was not just chicken wings like most gigs. It was a tremendous restaurant.

And a tremendous experience. The first night playing out overlooking the meadow and the water, it really might have been one of our favorite experiences, fucking beautiful on a full moon evening. Even though 600 people live on the island, maybe 80 of them were there drinking beer, dancing, loving us and we loved them back. 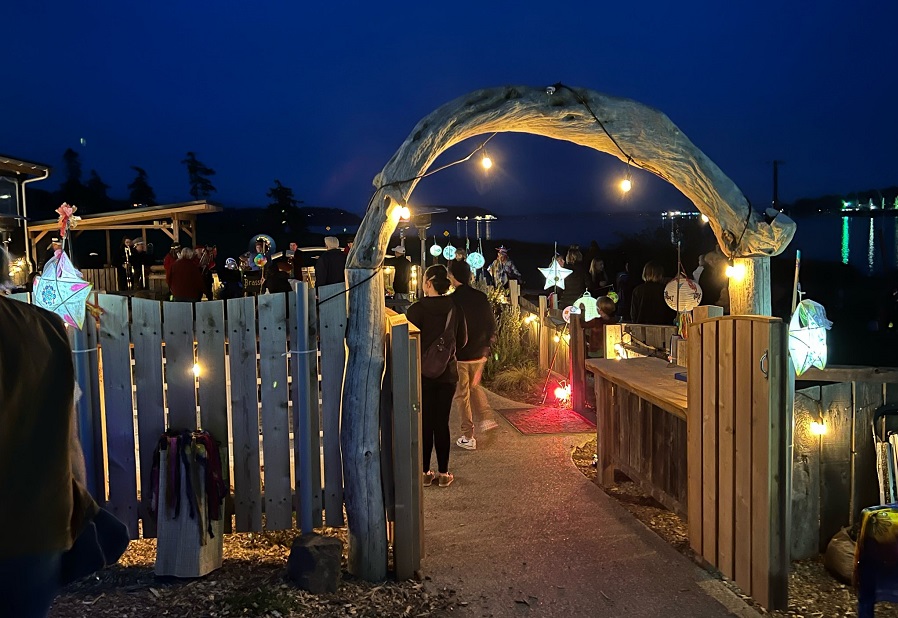 We played there 5 times over the years. We usually heard two things from people there: "We love you guys!" and "How the hell did you find this place?" One time we were playing upstairs and a guy frantically came running up yelling "The Bigfellas!" He was getting gas down in front, heard us playing an original (I think "Dollar For Every Dime") and he recognized us because he had our record playing in his truck's CD player at the time. I'm going on and on about this because we don't have rabid fans like this in our own hometown. Yet, The Bigfellas are a household name on Guemes Island.

Then something happened around 2014 when we inquired about coming up to play in 2015. There was a new owner of the store, a guy named Mark. He was nice enough to us and wanted to have us back.

We played there on another sweep through the Northwest in April 2015. When we got there, the chef had been replaced and the locals told us they did not like the new regime. Apparently, and this is all hearsay on our part, the new ownership eliminated the policy of bar tabs, among other unpopular changes there. Our local friends still came to see us, but there were some rumblings there.

While there in April 2015, Mark lined us up to play a big 4th Of July festival he was getting together. We were happy to have a reason to come back. Though disliked by many locals, he was still guaranteeing us good money, we had a place to stay down the road and we really loved any excuse to play some of our favorite watering holes between Portland and Canada.

Flash forward to the 4th of July on the big day. There was going to be a motorcycle contest as part of the festivities with Shay as the judge. (Remember, Shay is a big rider and does great work on Japanese bikes.)

Here's the listing of the event - seems fun enough, right?

They had hired security, roped off the grounds, it was a big production. But one giant snag: All of the island residents were in full-on revolt against the new ownership. Lots of them had their own rival tailgate party in a little parking lot across the street.

There might have been 30 people working there and a paying crowd of about 15. It was a complete disaster.

Down behind the stage near to one of the fences, some familiar locals called Shay and me over to tell us that they still loved us, but they were boycotting the store. Wow. They were calling ASCAP and BMI songwriting licensing organizations to drop a dime on ownership since they didn't pay ASCAP for royalties like the should have.

When things are this dismal, like cotton candy machines and no children, you just want to play as fast as you can.

Our setlist is as follows: Amsterdam, California King, Dollar For Every Dime, I Wish That I Were Gay, Vous Ne Parlez Francais, Jerry Jones, Moving Day, Bennie And The Jets, Chain Lightning, Dear Prudence, Everybody’s Gotta Learn Sometime, Mr. Blue Sky, Sympathy For The Devil, Walking On The Moon, Watching The Detectives, Something, Sunny Afternoon. I'm going to guess that those last 7 songs took us a total of about 18 minutes to play.

Oof. I feel a little bad for that owner, I mean this was like an exaggerated laughable failure of a festival that you would see in a comedy. Yes, he rubbed all of the locals the wrong way. But nobody deserved this. We got out of there so fast, Shay didn’t judge the motorcycle contest - although awarding first prize wasn’t that hard since it was just two 70-year-olds with Harleys there for the contest (a lovely couple we met on the ferry).

That was the last time we've played there. One of the great regrets of my life is that Shay and I didn't hear about the sale of the place. We would have put together some sort of ownership group. We heard it went for $750,000. That price includes a gas station, store, restaurant, water utilities, tons of acreage, a campsite all 50 yards from the only boat landing and a gorgeous view.

I believe Charlotte, our original owner, is back in business there. Which, as I write this, should inspire us to try to get back up there.

To anybody reading this from Guemes Island, we could easily be misremembering a thing or two. If you have some corrections or observations or memories, we would love to hear them. Drop us a line.

The other Bigfellas musical legacy of this is that the 4th inspired me to write the song Independence Day for the occasion. Sure, I just finished it on that July 2 so not enough time for anybody else to learn it. But that song was the best thing to come out of that debacle.